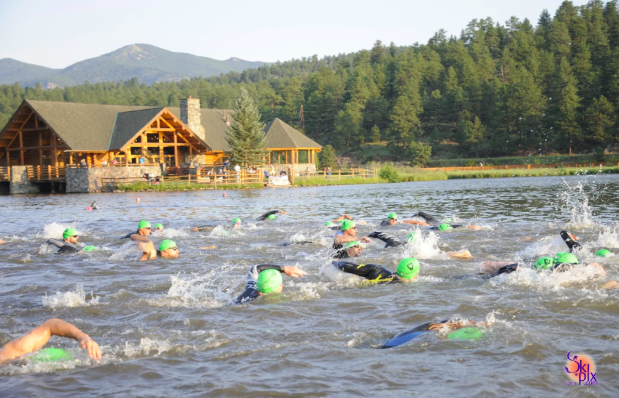 I can’t remember the last time I did a triathlon. Two. Three years ago maybe. I haven’t been on my road bike since we left Florida … almost a year ago. I’ve been in the pool once … last week. And I’ve been inconsistent at best on the run. Seemed reasonably sane then that I should register for a triathlon that’s a mere three weeks away. Right?

Evergreen Lake is what made me fall in love with this town the first time I stumbled upon it two years ago. It’s a small lake but it’s always full of life. Summertime sees the water covered in paddle boats and SUPs and winter turns it into an outdoor ice skating oasis. The 1.4 mile trail that runs the shoreline is a favorite for dog walkers. Though on the average day you aren’t allowed to swim in it (unless you oops off your paddle board that is), turns out once a year you can … for the Evergreen Sprint Triathlon. How ever could I resist!

It’s a 750 meter swim (wet suit required given the water temps). A 12 mile ride the first seven of which are uphill (ugh). And a three mile run. What could go wrong? 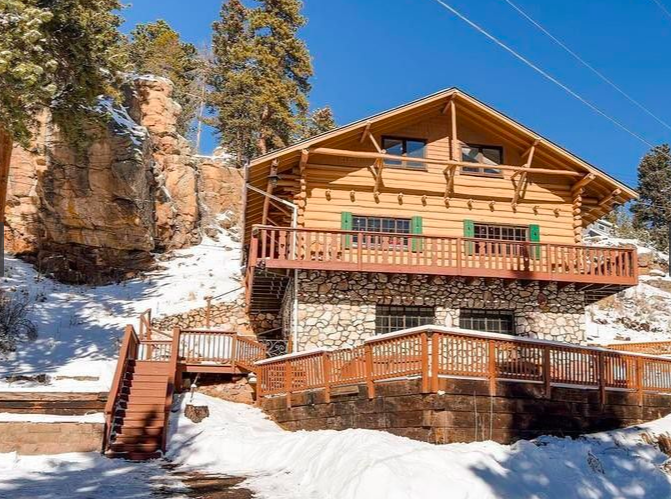 In 1909, in Evergreen Colorado, the Westerfield family built a small cabin on 160 acres but two years later, a harsh winter forced the family out. In 1913, Edwin Welz, an Austrian immigrant and his wife Marie “Riggi” Welz, heard about the abandoned property and rushed to homestead the land. Hanging on the old cabin door they found a rusted nail loosely holding a wooden sign that read “Brook Forest”. The Welzes had always dreamed of living in an Alpine oasis and this new world provided them the opportunity to create their own.

In 1919, after building the first of many small guest cottages, the Welz family officially opened the Brook Forest Inn. Though far outside the hustle and bustle of the city, the allure of electricity and running water in an elegant yet rustic setting brought visitors from near and far. On a boulder along the rockiest trek to get there, Edwin painted the words “The road to heaven is not smooth, either” and to many the escape into the mountains was truly heaven.

Over the next 15 years, the Welz’s expanded the Inn to an 18-room resort and one by one built guest cottages including a Swiss Chalet style lodge pole pine cottage with a white quartz base named The Daly Cottage. The Inn saw illustrious guests such as Theodore Rosevelt, Molly Brown, Willy Nelson, Liberace and more. And though the inn changed ownership hands multiple times in the decades to come, it remained a thriving destination and only recently shut its doors.

Check out these old articles and images I found. Hopefully I can track down more!

In 2019 in Evergreen Colorado, Don and I walked into the Daly Cottage with the listing agent. We knew little to nothing of the history it held inside its walls. All we knew was we wanted this house. The original wood beam living room ceiling and 1932 light fixtures, the red brick bedroom floor, the funky quartz steps leading up to the wraparound deck. I’ve always been drawn more to the character of older houses than the cookie-cutter and I was in love. Even Don, the ever-minded-real-estate brain of “a house is just a house” felt connected to it in ways I’ve never seen, and I think surprised even him. By that evening we had an accepted offer.

Here are some of the photos from the original real estate listing.

I’ve never been a history buff. In fact, history was the class I often slept through out of sheer boredom. But I’m intrigued. Curious. It’s rumored that Jack London wrote The Call of The Wild perched atop the large rock cliff behind the house. I desperately want to know who slept here, in the Daly, in what is now our bedroom. And I often catch my glances lingering out the kitchen window towards the abandoned Brook Forest Inn across the street wondering if the occasional light in a window is a keeper of the inn or a darker guest come to stay.

Here are some pics with our decor and colors.

In addition to its history as a vacation getaway destination, the Brook Forest Inn is well known for paranormal activity. The Inn is rumored to be haunted by at least three spirits: Carl, a stable hand who murdered his lover Jessica after learning of her infidelity. After strangling her in a bedroom of the Inn, Carl returned to the livery where he hung himself. Jessica is also said to haunt the Inn though Carl is known to be far more active. The third ghost is that of a young boy who is suspected to be the son of the Welz’s who died of pneumonia. Though the ghost stories are relegated to the Inn and not the surrounding cabins, we can’t help but wonder what, or who, time may reveal.

Want to know if we’ve had any unexplained experiences … I’ll tell that story in another post.

Want the whole story on the Brook Forest Inn and the historical role it plays? Read the application for historical registry.