The first few years of my running I ran in Asics. I can’t say I tried many different shoes but that’s what I somehow landed in and that’s what I stayed in. Until I found Newtons. At the time, all the talk on the street was that forefoot running was better for the body and I bought into it. But about a year later I ended up with a stress fracture in my metatarsal which was likely caused by the forced shift forefoot. Turns out I have collapsed metatarsal arches so forcing my stride onto them was a bad idea. Needless to say the Newtons went in the garbage and I went back in the Asics Keyano. I’ve wanted to try other shoes. The odd allure of the Hoka has been real. But given my fear of ending up broken (literally) I’ve opted to stay with the familiar.

Until now. I think I finally realized that I’m already broken. Maybe not literally this time but I’ve got issues. Chronic SI joint discomfort. Weird freaky knee popping. Ankle pain. Arthritis in my big toe. Yup. Broken. So maybe it’s time to consider my body is trying to tell me something.

Taking all my aches and pains into consideration, I decided to try the Altra Provisions. Zero drop and the FootShape™ toe box both seem like design elements that may benefit me. I’m not looking for a miracle cure but I’m hoping a little help on the running form might fix a few of the aches and pains. So I’ll be breaking into these beauties slowly over the next month or so. Updates to come! 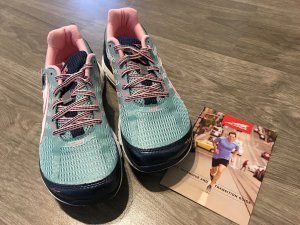 Filed Under: Gear I love (or hate), Trails